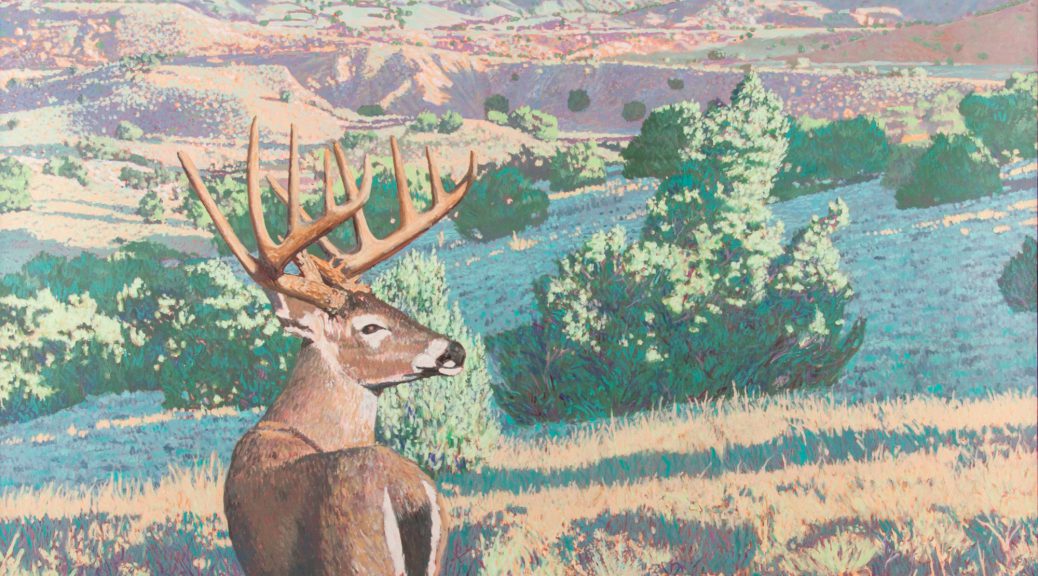 Jim Stoker was born in 1935 in Nash, Texas, and reared in Atlanta, a rural town in East Texas. He received a BFA in Applied Art from The University of Texas at Austin in 1957, and an MA in painting, drawing, and printmaking from New Mexico Highlands University in 1962 where he studied with Elmer Schooley. Stoker painted throughout a teaching career which culminated in a 30-year tenure at Trinity University in San Antonio.

Most of the Stoker works we are offering range from the early 1970’s to the early 1980’s, when he was teaching at Trinity University in San Antonio. Stylistically, in the early 70’s Stoker’s oil paintings tended towards representational landscapes with figures at work. His compositions often incorporated incongruous animals milling around the workers or the tools they used.

In the mid-70’s the subjects and style of his work changed to flat colorful interiors, resembling paper cut out collages more than paintings.

In the late 70’s and early 80’s, he and his wife would spend the Summers in Santa Fe, NM where he painted a series of paintings focusing on the architecture and its relationship to the natural occurring and the planted flora.

He later said of that time, you used to see Hollyhocks everywhere in Santa Fe in the late 80’s.  You would think it was the state flower there were so many.  Now, you hardly see any when traveling around that area.

His work became more representational in style and focused more on nature and the environment.

Jim and his wife Elouise are both naturalists who helped form the San Antonio, Texas chapter of the Sierra Club. Stoker’s efforts to protect the natural fauna and flora around San Antonio led to a series of paintings he titled No Place to Live:… The theme of this series pointed to the animals’ plight when humans are taking over their natural living spaces.

Jim’s current paintings primarily focus on the riparian zone of the Guadalupe river near a cabin that has been in his wife’s family for generations.  He has created a unique technique he calls Confetti Splatter that he uses to create a multicolored dot matrix as an underpainting  for his naturalistic landscape compositions.